Everybody knows that Twitter (TWTR -2.09%) has accepted a buyout proposal from Tesla (TSLA 0.58%) CEO Elon Musk. However, there’s some confusion about the deal.

Many headlines and social media posts treat the buyout as a completely done deal, expecting Musk to roll out dramatic changes to the microblogging platform right away. That’s not what’s going on at all.

Musk’s $44 billion Twitter buyout will not be complete until the ink dries on the final John Hancock, and the agreement could fall apart in many ways. Sensible investors have baked that risk into Twitter’s share prices, too.

Let’s take a closer look at what needs to happen before Elon Musk can call Twitter his own. 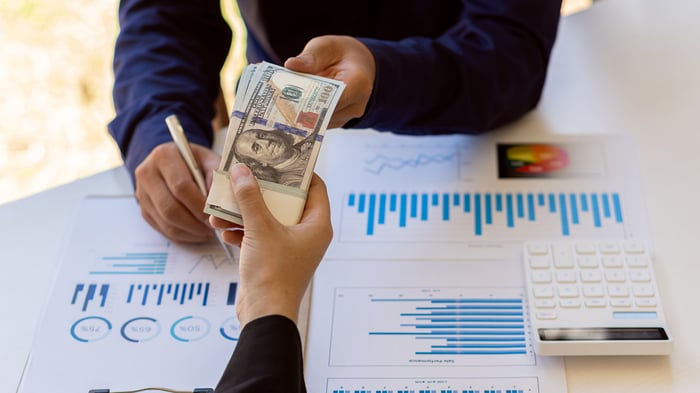 There’s nothing special or magic about this bid that would let the deal bypass the laws, regulations, and generally accepted practices of mergers and acquisitions. This deal requires several types of approval from various parties, just like any other buyout of a large public business.

Technically speaking, Elon Musk isn’t hauling $44 billion of cash out of his own pocket in exchange for every share of Twitter. Instead, Musk has created a special company called X Holdings I, which, in turn, owns X Holdings II. It’s X Holdings II — a subsidiary of a Musk-controlled company — that plans to merge with Twitter.

The resulting entity will remain a subsidiary of X Holdings I, using Twitter’s name and corporate identity. At that point, Twitter will have left the public stock market and be controlled by Musk through a couple of layers of legal and accounting shells.

By then, each Twitter share will have been canceled in exchange for $54.20 in cash. The surviving company also inherits Twitter’s balance sheet, which held $6.4 billion of cash equivalents (against $4.2 billion in long-term debt) and long-term lease obligations of $1.1 billion, at the end of 2021.

The deal is financed by $21 billion of Musk’s personal wealth, another $13 billion in debt financing, and a margin loan of $12.5 billion. The additional debt will flow through the X Holdings structure, including another subsidiary known as X Holdings III.

Furthermore, the agreement provides termination fees of $1 billion in case the merger is canceled for a variety of reasons. That payment goes from Twitter to Musk’s acquisition companies if the company finds and accepts a better offer from another buyer — or in the opposite direction if the X Holdings companies fail to meet their end of the bargain. The proposal doesn’t specify which way the fee would flow in case the deal is tripped up by regulatory reviews along the way, but I’m sure we’d see lawsuits attempting to shift the blame and the termination fee.

There are indeed a few hurdles left to cross.

The agreement expires on October 24 but may be extended for six months if the regulatory approvals so require.

Musk’s buyout offer boosted Twitter’s stock, of course, but not by that much. The share price never rose above $52.30 on the day of the proposal and has already backed down by a fairly significant distance. You can now buy Twitter shares at an 11% discount to Musk’s cash offer, so you can play a game of merger arbitrage here.

However, that payout depends on the successful completion of all the steps listed above. The discount on the table today is based on the risk of not achieving that result.

I wouldn’t be surprised to see Twitter’s institutional shareholders demanding a more generous offer. Don’t forget that the stock traded more than 50% higher last summer, and many major shareholders would prefer a bid much closer to that level: 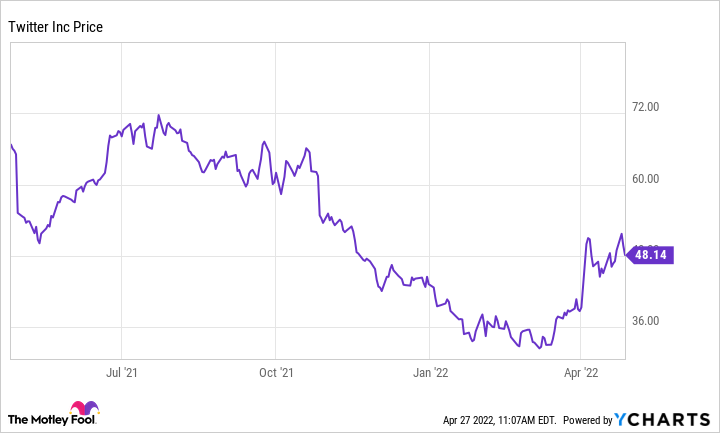 It’s unclear whether Elon Musk would be able to finance a larger deal, so that’s a two-pronged threat of a negative shareholder vote and a crumbling financial structure.

In other words, the risk-based discount makes perfect sense, and I strongly suggest that you don’t bet the proverbial farm on Twitter today. Holding your breath until the deal is approved could also be hazardous to your health.